Pine Ridge Dog Sanctuary was founded in 1958 by Mr Bernard Cuff, who worked tirelessly throughout his life in saving homeless dogs with terribly bleak futures.  After learning of a legislation stating that all dogs found unleashed on public streets would be impounded for 7 days and then destroyed if not claimed, he felt that urgent action was required.  This task was not an easy one, as at that time there were no rescue centres which we are fortunate to have today.  So, he felt he had to take matters into his own hands and began taking the unclaimed dogs from the pound (at a cost to himself) to his home – an old farm.  This worked temporarily as pig sties and stables were converted to kennels, and a large exercise run was constructed.  However, as the number of dogs in need increased, space became a serious issue, and with his unconditional love to help every single one he then began moving them indoors which saw bathrooms, bedrooms and the kitchen turned into ‘sanctuary’ until forever homes could be found.

The rehoming process was a simple one: potential owners were interviewed, then if all parties were happy and ensured that a safe, loving environment could be offered, a suitable dog would be introduced, if not they would remain with Bernard until a suitable home was found.

Once Bernard passed away his widow Connie continued his work and took full responsibility of the shelter, she and her team work night and day in the hope of giving these dogs a better future.

The rehoming process at Pine Ridge today is much the same as it has always been: on arrival you will meet with Connie or Claire (the Manager) for an in depth chat about what you are looking for in your 4 legged companion, and if they feel that they have a dog suitable that matches your lifestyle, an introduction will take place.  If old enough all dogs are spayed/neutered and fully vaccinated before leaving the sanctuary.

Pine Ridge relies solely on donation from the public, whether it be through monthly direct debits from keen animal lovers, one-off donations from either a sponsored ride or sponsored marathon entered, or monies raised from the twice yearly fundraising events held at Pine Ridge – the Open Day and the Fun Dog Show. These are fantastic afternoons out where you can meet the staff, and at the Open Day meet some of the dogs and learn about how they came to be here.  Every penny raised at these events goes to the dogs so please come along and support this worthy cause. 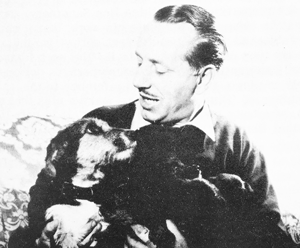 Bernard Cuff, with mother and puppies belonging to an old man, who could not afford to keep them. This photograph by courtesy of the “Daily Express” appeared in November 1959, and made us quite a number of friends.

Connie who helped us on a voluntary basis from 1962, prior to joining us permanently a few years later, pictured with three three-legged dogs.